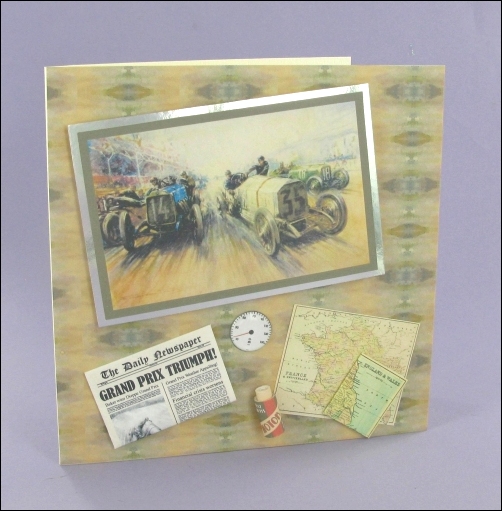 I love the soft greens of the background on this card.  Fabulous miniatures too!

To make the card, cover the front of a 15cm cream card blank with the background paper using double-sided tape.  I've used 160gsm paper to print this onto, but you could also use a lighter paper if you prefer.

Cut out one of the 10.4cm wide motifs and stick it onto a larger piece of silver metallic card with double-sided tape before trimming around with a craft knife and ruler to leave a small border.

Cut out one of the mini newspapers, two maps and the motor oil strip with a craft knife and ruler.  The motor oil has a small strip at the side which should be cut out separately - this forms the 'lid'.

I've used a map of France and one of England & Wales here (England & Wales from the maps sheet) but if you're not fussed about what maps they are, you can just use the two from the assorted miniatures sheet. Cut out the maps and fold one of them into quarters, sealing closed with double-sided tape.

For the motor oil, use a cocktail stick to roll up the long motor-oil piece fairly tightly.  Let it out when you've finished rolling until it's the size that you want, then seal shut with double-sided tape.  Do the same with the lid strip.  Stick it to the main oil can with a blob of strong tacky glue such as Aleene's.  Allow to dry before sticking to the card.

For the speedometer (or compass), I've used 16mm clear dome stickers here (from Ebay).  Stick them to the appropriate sized piece on the assorted miniatures sheet, then trim round with small scissors.  There are other sized dials on the sheet in case you happen to have different sized dome stickers.

To assemble the card, arrange the items on the card blank until you're happy with the arrangement.  Add the picture with sticky pads, the newspaper, maps and speedometer with double-sided tape and finally add the motor-oil with a strong tacky glue such as Aleene's.

Products used on the Grand Prix at Dieppe Card