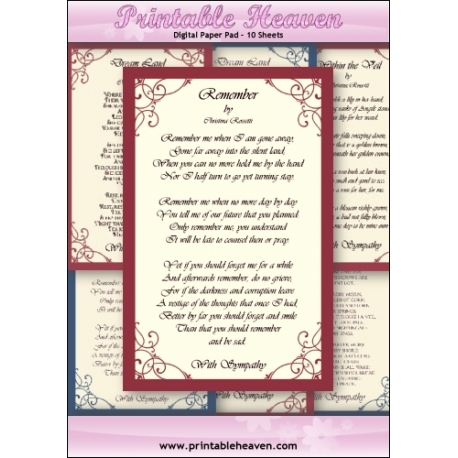 Christina Rossetti (1830-1894) was an English poet who wrote a variety of romantic, devotional and children's poems.

Although her most famous work is no doubt the Christmas carol In the Bleak Midwinter, her poem Remember is one of the most beautiful pieces ever written about love and death.

Remember features in this set of 10 sheets which also contains Rossetti's Dreamland, Sleeping at Last, Song and Within the Veil.  We've made both male and female versions of the poems so that there's something to suit everyone when the worst happens.  A couple of the poems have been slightly adapted from the originals to say 'him' instead of 'her', 'he' instead of 'she' etc.

Use the poems to make simple sympathy cards that will mean such a lot when kind words are desperately needed.

The borders on the poems have been made to go with two of the sheets in the Ornamental Floral Paper Pad.